Convincing a large number of Hualish to accept and practice HH is not a trivial task. It is probably most effective to start with the younger generation by implementing simple and fun activities that instill the fundamentals of HH. Based on this line of thinking, the first step in establishing HH could be popularizing the Coming of Age Rite (CAR). 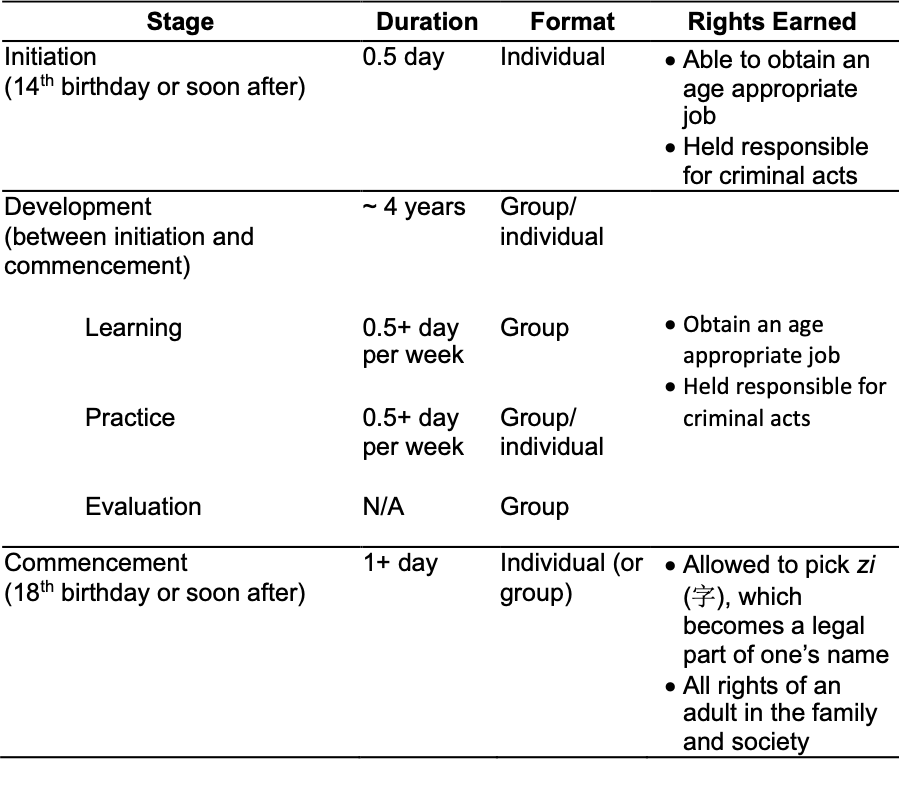 In HH, the CAR begins at age 14, largely because this is the time when young people are about to finish middle school and enter either high school or professional school. This is also the time when a young person is still developing his or her world view and can be molded with the right education and experience.

The initiation should ideally take the form of an individual ceremony, but a group format is fine if several young people of the same age decide to be initiated together. Participants may include family members and classmates. The initiation ceremony should be a serious event attended by a small group and probably should last half a day. It should be organized by someone who is skilled in HH, and should not simply be a birthday party.

In order for the HH CAR to be a meaningful experience for the young initiate, he or she should be granted certain rights after the initiation ceremony.

Such activities involve traditional teaching at home or community centers, specialized weekend programs, or at schools if they are integrated into the regular curriculum. In addition, minors should learn conventional skillsets necessary for survival as an adult in society, such as cooking, cleaning and interacting with strangers.

The practice component of development involves two tasks. First, initiates should apply what they have learned in the classroom to real life. Second, initiates should develop the habit of volunteering 2% of their time (one week a year). Parents are encouraged to volunteer alongside their children during this period, if appropriate.

Periodic evaluations, rather than a one-time evaluation like the College Entrance Examination. Evaluations can be either written or hands-on skill tests, depending on the topic and should be incorporated into learning and practice. Initiates must pass all required evaluations and a certain number of elective evaluations.

The commencement ceremony is the conclusion of the HH CAR, and should be both solemn and celebratory. Since this marks the official transition to adulthood, in addition to family and peers, this ceremony should include family friends and acquaintances to mark the official introduction of the young adult to the family network. Depending on an individual’s situation, the commencement ceremony should last a full day, or even longer if necessary to emphasize the importance of the beginning of adulthood. Ideally, it should be an individual event if resources permit, but in other cases, a group ceremony might be more effective and leave a stronger impression on young adults.

Commencement serves as the official declaration that the family should treat the person as an adult with independent ideas whose opinions should be fully considered. It also signals to other people, including family friends, that the person should be treated as an adult who can speak for himself/herself and the family, and that he or she should be treated with the full courtesy of an adult.

Commencement confers the new adult the right to pick his or her own zi (字). After the ceremony, the person should be addressed as such, and not be called by his or her first name except by his or her elders.